PCBs for this module are now discontinued

The Discontinuity is the updated version of an older Oakley module called the Wavefolder. It is a voltage controlled waveshaper module designed primarily for use in modular analogue music synthesisers. The module comes in the standard 5U high 2U wide format which is directly compatible with MOTM series but can be built as a double width MU module too.

The Discontinuity module, although using the same core technology as the old Oakley Wavefolder, is different enough in circuitry, usage and front panel design to be worthy of a new name. And it is these additional discontinuity and offset controls and CV inputs that make this module very unique.

Waveshaper modules work very differently to, and perhaps less intuitively than, other sound shaping modules such as filters, ring modulators and amplifiers. As such the Discontinuity will take some time to get used to. However, when used to process simple VCO waveforms it is capable of creating some very beautiful tones, all of which can be varied dynamically in musically interesting ways. Input waveform type, whether triangle, sawtooth or sine, can have profound tonal differences in the Discontinuity's output. And varying the input level can also have some amazing affects.

Internally the module is arranged as five sections connected in series.

1. The Soft Clipper. This circuit gently restricts all input signals to around +/- 5.5 volts peak. Its essentially mimics an overdriven valve or tube amplifier. The output of this circuit passes directly to the next stage which is...

2. The Clamper. This prevents the output from going above or below a preset limit. Unlike the soft clipper circuit the clamping is hard and abrupt. And unlike the soft clipper the limit is completely voltage controllable. We call it the Threshold and it can be controlled with a front panel pot or input CV. Any input can be altered dramatically with this function. As well as being passed on to the next stage of the module, the output of clamper is available at its own output.

A three way toggle switch, called 'polarity' although not marked as such on the front panel, offers three modes of clamping: 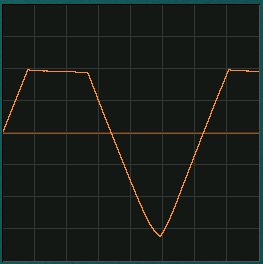 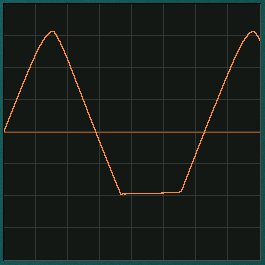 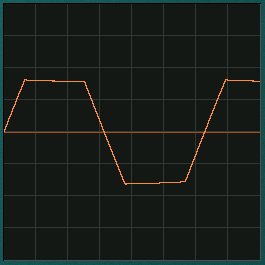 The three polarity modes, positive, negative and both.

In the old Wavefolder when the signal was clamped the output signal was simply held at the threshold voltage. In the Oakley Discontinuity the output level during clamping can now be varied dynamically. This can be done either as a function of the threshold voltage, via the module's Discontinuity control and its CV input, or as a fixed offset with the Offset control and its CV input. Furthermore, the offset can either be applied symmetrically or asymmetrically depending on the Track/Oppose switch. What this means is that we can actually remove any proportion of the original signal at that point where it exceeds the threshold voltages and replace it with another input. In other words we can splice one waveform in place of another. This has the potential to make some very new and wonderful timbres. 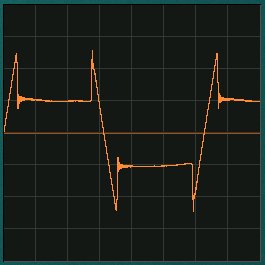 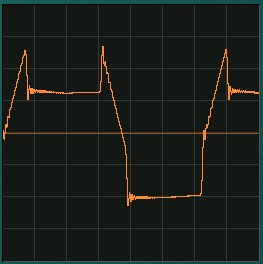 Discontinuities being introduced by a) the Discontinuity pot b) the offset control in Oppose mode.

3. The Clipper. What the Clamper bites off, the clipper returns. The Clip output is the part of the original input signal that gets chopped off by the clamper circuit. So if you put a 5V peak triangle waveform into the Clamper, set the threshold to be 2.5V and set the mode switch to BOTH, the Clamp output will give you the neatly clipped almost square wave output, while the clipper will give you the tips of the pointed bits of the original triangle waveform.

4. The Folder. The Discontinuity's fourth section is based around a four quadrant multiplier or ring modulator. Here the Clip out and Clamp out are mixed together. However, the clip output may be added or subtracted from the clamped signal. A pot and an external CV sets the mix ratio and polarity. Again, consider the 5V triangle waveform with the polarity switch set to either POS or NEG. With the Fold pot set to 0, you get the plain Clamped signal at the main output. Turn the Fold pot clockwise and the clipped signal will return to create the original signal once more. But keep turning it, and the clipped signal is now bigger then the original. Now turn the pot the other way. The clipped signal gets subtracted from the clamped signal. You can get full wave rectification, thus your triangle becomes another triangle at twice the frequency. Multiplication. Turn it up further and more harmonics come in. 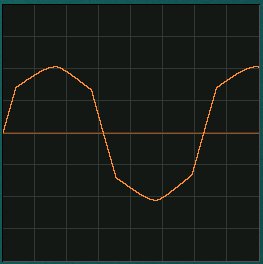 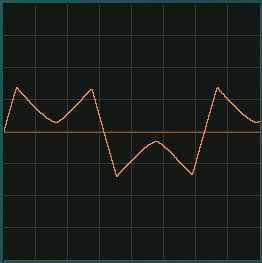 The fold parameter controls the gain of waveform that exceeds the threshold voltage. In the left picture we see the gain set to slightly less than one. In the right picture the gain is now negative resulting in the waveform being folded back on itself. 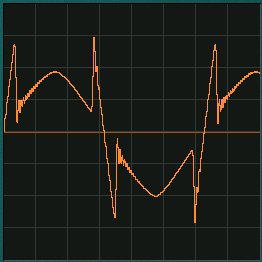 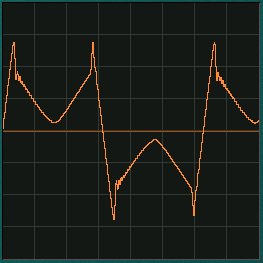 These two pictures show the output with both folding and a discontinuity applied. The left shot shows the fold gain at around 50%, while the right hand shot shows a gain of around -50% and thus folding back on itself.

5. The Amp. The last stage is a simple x10 amplifier. The Discontinuity can clip accurately down to small levels if you want, so you need a good amplifier to bring it up to a decent level again.

And don't forget the Discontinuity will work with any signal, audio and CV. You can mangle EG outputs, LFOs and, of course, your VCO. Different waveforms will be treated in very different ways. 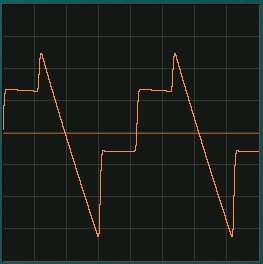 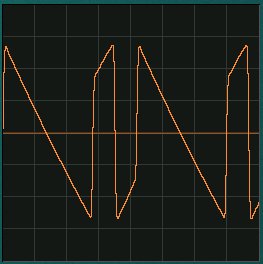 These two shots show sawtooth waveforms being clipped, discontinuitied and folded. A great many new and interesing timbres and modulations can be created.

The module accommodates either our standard Oakley/MOTM power header or a Synthesizers.com power header. The unit requires +/-15V and takes a maximum of 60mA from the positive rail and slightly less from the negative rail.

Triangle wave input with a variety of manual and LFO tweaking.

All samples used a minimum of one Oakley VCO, one Oakley VC-LFO for modulation and a midiDAC for control. Recordings were done dry except where stated.

Triangle wave input. Negative and positive clipping, ie. no folding or discontinuity. Manual and then VC-LFO modulation of threshold voltage.

Sawtooth wave input. A combination of folding and clipping to alter a sawtooth to a ramp waveform via various discontinuous waveforms.

Triangle wave from VCO1 to main input, Sinewave one octave down from VCO2 to Offset input. Manual control of threshold to move from one VCO to the other. Some additional filtering from a COTA module and shaped with an ADSR. Stereo echo effect added to provide ambience.

Sine wave inputs from two VCOs to create a ring modulation effect. The modulation VCO is connected to the Fold CV input and its frequency is manually tweaked as the clip progresses. The Fold pot is centralised, except towards the end of the clip, and the Threshold and Discontinuity pots are set fully anti-clockwise.

Sawtooth wave input. An ADSR is used to modulate the fold parameter and shapes the output from sawtooth to a triangle wave to create filter sweep type effects.

Schematics are only available to purchasers of the PCB and will be sent via e-mail when the board(s) are shipped.

A Schaeffer front panel can be made for this module. The databases can be found by downloading the following links:

5U format in traditional black

5U format in natural silver

To read these files you will need a copy of 'Frontplatten designer' from Schaeffer. The program also features on-line ordering, so it's easy to buy your panels from Scheaffer.

The company are based in Berlin in Germany and will send out panels to anywhere in the world. Delivery to the UK normally takes around ten days. For North American users you can also order your Schaeffer panels from Front Panel Express.

Back to projects page: Projects