The Oakley SVF is a 10HP wide two stage multimode filter module capable of high pass, low pass, band pass and notch output modes. All four outputs are available simultaneously. The module is a stand alone version of the filter in the Oakley ASV 5U module which is based around the classic two pole state variable filter topology as used in a variety of vintage synths including the Oberheim SEM and OB-X.

The module has two audio inputs, each with its own mini level control, which are mixed together before being sent to the filter core. The mixer can be operated in either 'clean' or 'soft clip' modes. Clean mode will simply mix the signals together and feed them cleanly into the filter core. Soft clip mode will gently limit the maximum voltage output of the mixer rounding off the top and the bottom peaks of the audio signal. In soft clip mode the asymmetry control allows you to force the mixer's output harder into the negative soft clipping zone distorting the audio in an interesting way.

The SVF module comprises of two printed circuit boards (PCBs) connected together with six 0.1” (2.54mm) single in line (SIL) headers and sockets. The main board on the rear of the module houses the power input and conditioning, the filter core, exponential convertor and output circuitry. The pot board has the pots, switch, and sockets that are attached to the front panel, as well as the mixer, soft clipping circuit, and CV summing circuit. The main board is a four layer design, while the pot board is a two layer design. Each board is the same size; 49 mm x 107 mm.

Two droning sawtooths from an Oakley DVCO being fed equally into the SVF module at fairly high resonance. The SVF's cut off is modulated by a decaying sweep from an Oakley ADSR and the output of an eight step sequencer. Reverb and some light echo adds to the ambience.

A simple eight step sequence modulates both the pitch of the DVCO's two oscillators and cut-off frequency of the SVF. The second channel of the sequencer and an Oakley Envelope modulates the filter's cut off frequency. The SVF's pots and Envelope's decay time is manually altered as the sample progresses. Near the end of the sample one of the VCOs is tuned up an octave and a bouncy delay is added.

The same sequence as before and again the SVF's cut-off, resonance, and CV depth pots are manually altered to show the variation of tone that can be acheived.

Both boards are required to build the Oakley SVF for Eurorack project.

All other parts can be purchased from your usual electronic component supplier.

All prices include VAT at UK rates. Shipping is additional to these prices. See also the FAQ page.

Schematics are only available to purchasers of the PCBs and will be sent via e-mail when the boards are shipped.

A Schaeffer front panel can be made for this module. The database can be found by downloading the following link:

To read, edit and print these files you will need a copy of 'Frontplatten Designer' from Schaeffer. Panels can be ordered via the program using its secure online ordering system.

Schaeffer are based in Berlin, Germany and can send panels to anywhere in the world. Delivery to the UK normally takes around ten days. For North American users you can also order your Schaeffer panels from Front Panel Express. 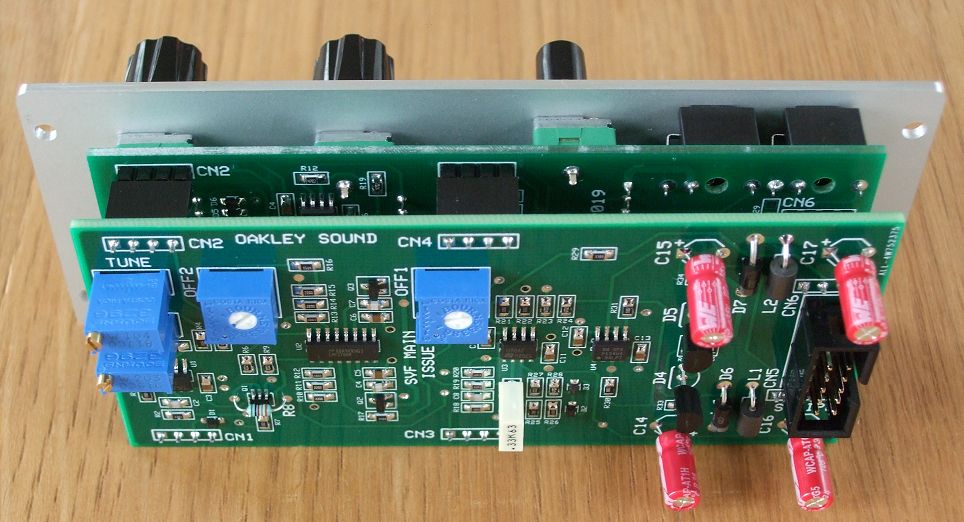 Back to Eurorack projects page: Projects